2019 Ford Ranger Gets The SEMA Treatment

Ford will have more than 150 performance parts and accessories available for the new Ranger when it goes on sale early next year. To preview these offerings, the automaker is introducing seven custom Rangers ahead of this year’s SEMA show in Las Vegas. 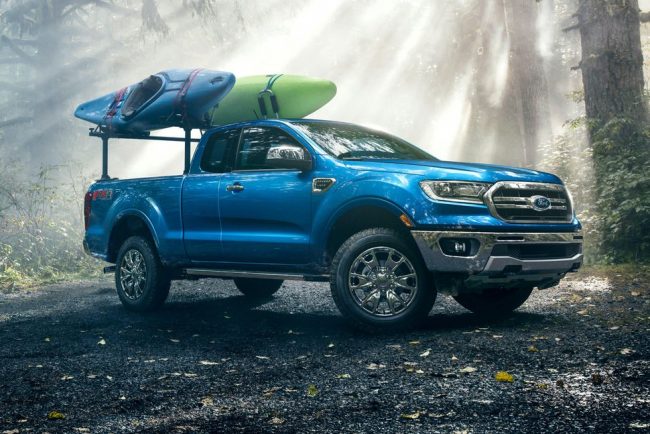 Don’t be fooled by the exterior; this truck (shown above) is as much geek as it is off-roader. It has Xbox One X game consoles mounted behind the rear seats, and 42-inch high-definition external screens so users can play from the bed of the truck. Plus, it has an Xbox theme wrap and lighting.

The truck is prepared for serious off-roading, thanks to its BDS Suspension upper control arms and six-inch lift. Adding to the performance upgrades are Fox 2.5-inch coil-over front and rear shocks, differential cover and rear end differential skid plate kit, and 17-inch wheels wrapped around mud terrain tires. Like the other six Ranger concepts, it gets a cat-back exhaust. Also look for special front and rear bumpers and side steps.

Ranger Base Camp from Ford Performance

Like the Pre-Runner, the Ranger Base Camp receives the off-road package, three-inch leveling kit with off-road shocks, BDS Suspension upper control arm kit, and other similar updates. Of course, the biggest difference is the giant tent in the rear. This model also receives an awning, a bed rail cargo management system, and bed light.

An A-pillar snorkel helps the engine breathe, and there is also a differential cover. Rounding out the updates are special front and rear bumpers, grille guard, and 18-inch all-terrain tires wrapped around black wheels with silver and orange accents.

Even before we’ve had a chance to drive it, the 2021 Kia Optima is proving to be an interesting...

Going strictly by the numbers, the 2020 Chevrolet Corvette is a smashing success. All 40,000 units for...