France: Why The Yellow Vests Are Angry

President Macron was overwhelmed by a protest movement coming from the provinces and from below. His arrogance fuels the anger. 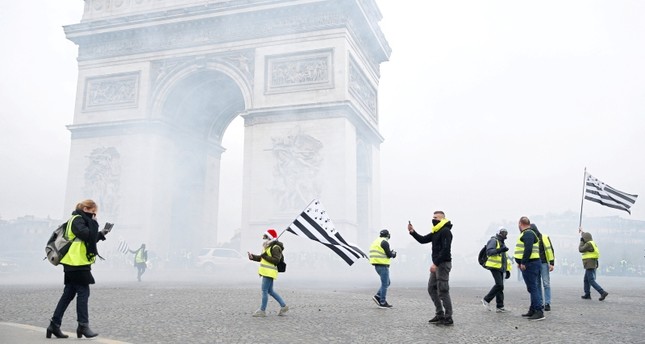 On Monday, in the French capital battered shop windows were repaired of looted shops, removed burned-out cars and remains of barricades. The traces of heavy riots on Saturday symbolize the shambles that President Emmanuel Macron faces. He is in a mess that he largely attributed himself.

The head of state must now defend his contested authority against the increasingly radical demands of the so-called yellow west. Macron has commissioned his prime minister, Douard Philippe, to negotiate with representatives of the parties, regions and speakers of this protest movement of people in yellow safety vests about a way out of the crisis.

Nothing can justify the wanton violence and devastation. The anger of people all over France, who recognize themselves in this warning or breakdown symbol of the “Gilets jaunes” or have been taking part in these actions for two weeks now, seems more understandable. If it had belonged, the not-so-wrong-as-a-snobist elite in Paris would have heard the complaints of those who had just arrived. They preferred to suppress all problems of economic and social marginalization or impoverishment.

For years, it has been known that whole sections of the population have missed out because they have literally been left behind in the decades of globalization: the victims of the unstoppable decline of industry, the residents of the outskirts of the banlieue, the boys who, despite their diplomas, cannot find a livelihood, the citizens in the ex-colonies overseas and especially those in rural areas.

In this periphery, there is not only a shortage of jobs. Even working people often do not earn enough to stay afloat. Although there are no train connections, no doctors, no pharmacy, no shops and no cafés in many villages, their residents pay the same amount of taxes and duties – as commuters they have to spend a great deal on rising fuel prices. The trigger for the protests was logically the high fuel prices and the Eco-tax on diesel, which came into force on 1st January.

Macron had also promised them more purchasing power in his election. Many of them are now quite angry – about him and about himself because they believed him. For the liberalization of the economy, from which Macron hopes to strengthen the competitiveness of French companies, will only scare them in the end. Of course, the structural disadvantages and handicaps that plague these citizens are not just yesterday’s, as Macron says, but from the days of his predecessors, who did not want to reform France. But to ignore their long-held rage is either a sign of the inability of a dilettante or an expression of cynical arrogance.

For this reason, broad sections of the population is united today with the yellow vests. The president seems presumptuous to them, but in the end, almost everyone has a reason to complain about too high taxes and bureaucracy and therefore to put on a yellow gilet.

Significantly, neither the number of more than 400 injured and the three deaths on the roadblocks nor the violence on two Saturdays on the Champs- Elysées has led to a decline in support, quite the opposite: at the beginning, three-quarters have supported the movement pronounced the yellow vests, there are now according to surveys 84 percent.

In any case, Macron was wrong when he initially thought he could just sit in the provincial “whine” of the have-nots like a union strike. He willingly put up with the current escalation and put himself and his power position into play. Macron has profited in his election from the fact that the traditional parties have lost all credit, and even with his personalized exercise of power, has contributed to the loss of influence of the representative organizations and institutions. Macron, is said to love politics “mano a mano,” the verbal confrontation with critics. But now he faces his people, the “recalcitrant Gauls,” as he mocked recently. These, as you know, are not only contentious, but quickly radical and violent.

Macron’s dogmatic stance has suddenly turned the conflict into a pre-revolutionary crisis. In the ranks of the demonstrators, but also among the bourgeois shocked by the chaos in Paris, there is talk of the storm of the Bastille in 1789 or of May ’68.

“Libération” editor-in-chief Laurent Joffrin dares the comparison between the yellow vests and the sans-culottes of the great revolution and between Macron and Marie-Antoinette. How should that end? With a real revolution and the symbolic guillotine of a capitulation or resignation of the head of state? The reason for too long glee is the least.

The opposition is forcing the state leadership to make real concessions in the form of a break in the planned increases in taxes or, much more risky for Macron, a plebiscite on it. As always, when the French people are seized by a revolutionary fever, the head of the king – in this case Macron’s resignation – is demanded on the street.