In the summer of 2016, Nikki Haley warned that if Republican candidate Donald Trump did not change his rhetoric, the consequences could be deadly. 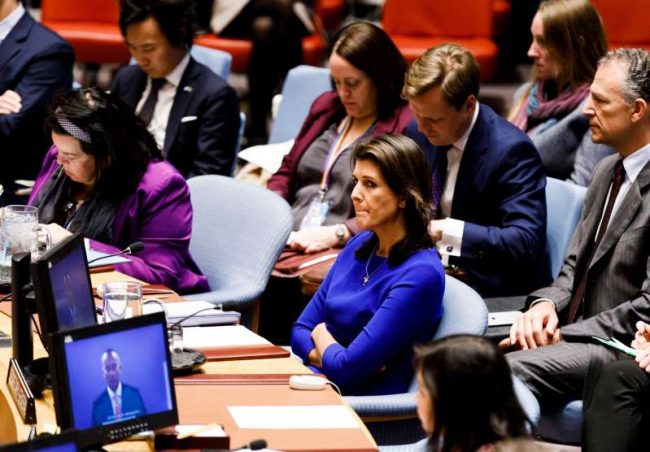 “I know what that rhetoric can do,” Haley told the Associated Press weeks before the anniversary of a racially driven massacre at an African American church in her home state of South Carolina. “I saw it happen.”

This week, Haley, the Trump administration’s ambassador to the United Nations, spoke out after another mass killing, at a Pittsburgh synagogue. Her message: Don’t blame the president.

When he was a candidate, prominent Republicans and primary rivals expressed alarm about Trump’s criticism of immigrants, his encouragement of violence at his rallies and his hostility toward the media.

But once he was elected president, many of those voices went silent or softened. The Republicans who have crossed Trump during his presidency have paid a steep political price.

“It’s called the absolute moral collapse of the Republican Party,” said Rick Wilson, a GOP strategist and vocal Trump critic. “They live in utter terror that Donald Trump will turn against them, and that fear controls their behavior every day, all the time.”

supremacist rally in Charlottesville, his detractors say he has nudged the country toward a dangerous place.

Few powerful Republicans have joined those focusing their criticism squarely on Trump in recent days.

Haley, who plans to step down from her post at the end of the year, drew widespread attention Tuesday for her tweet the night before urging people not to single out the president.

Rubio has criticized heated rhetoric on both sides of the political divide in recent days, rather than calling out Trump directly the way he did as a presidential rival.

“A nation whose most visible leaders & institutions rely on anger to motivate people will eventually become a nation of very angry people,” Rubio tweeted Monday. Asked whether Trump was stoking anger, Rubio offered a broader remark.

“I think our politics stokes anger, and I think all of us to some level have to examine the way we behave,” Rubio told reporters Monday night at a campaign appearance for a House incumbent in Illinois. “I think it’s a moment of reflection for all of us, and the president included, but myself. And by the way so, too, those who cover the president.”

Haley was a supporter of Rubio in her state’s pivotal presidential primary. Trump won the state in the primary and the general election.

“Disgusting, vile threats and actions against fellow Americans and our institutions are sadly unsurprising: hate acts follow hate speech. It is past time for us to turn down and tune out the rabid rhetoric,” Romney tweeted last week.