Panasonic’s Lumix mirrorless cameras are widely regarded as the best choice for anyone looking to create beautiful video within a mortal’s budget. 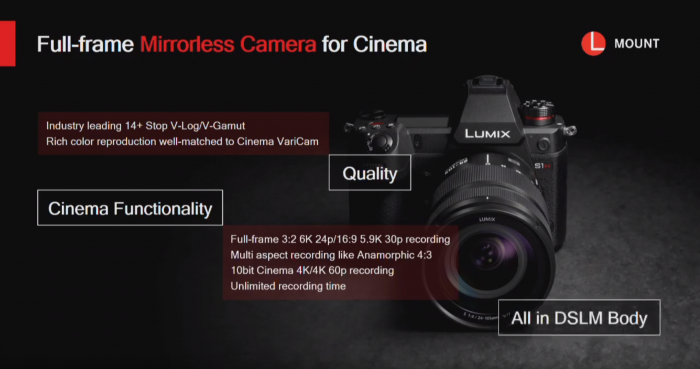 The company is today pushing that reputation up into a higher price, quality, and resolution bracket with the announcement of $4,000 the Lumix S1H, a full-frame shooter capable of recording 6K video at 24fps. It’s a fresh iteration of the Lumix S1, which made its debut at Photokina last year and which I’ve recently tried and been delighted by.

The upcoming Lumix S1H, scheduled to launch in the fall, comes with the claim of being the world’s first full-frame camera to do 6K/24p at a 3:2 aspect ratio or 5.9K/30p at 16:9. Aside from being cool in its own right, this bump in resolution capability should be a big help for people shooting 4K too, as it will allow them to crop in or apply video stabilization without losing image quality as they otherwise would. Downsampling to 4K will also be an option, which sounds preposterous to even think.

Panasonic touts a wide dynamic range of 14+ stops in the Lumix S1H, which should help it capture detail even in extremely dark or bright sections of a scene. The company hasn’t specified if the S1H will have in-body image stabilization like the S1 and the high-resolution S1R, but that can probably be considered a likely inclusion for a camera designed specifically for video capture. Also important for video shooters: the S1H has no recording time limits, so you’ll be constrained only by your memory card’s capacity and the camera’s battery.

Though the $4,000 price makes the Panasonic Lumix S1H strictly professional equipment, it’s still a positive surprise for many who might have expected a camera of this kind to be closer to $6,000 (which would have been a neat match for the 6K resolution). My experience with the Lumix S1, which I used to photograph the Powerbeats Pro, has been exceedingly good, with fast performance, luscious bokeh, and incredible ease of use for such a bulky and otherwise intimidating thing. If the Lumix S1H keeps that going and extends it into the video realm, Panasonic will have another winner on its hands.