An electric racing car built by Swiss student engineers has broken the world record for acceleration by battery-powered vehicles. 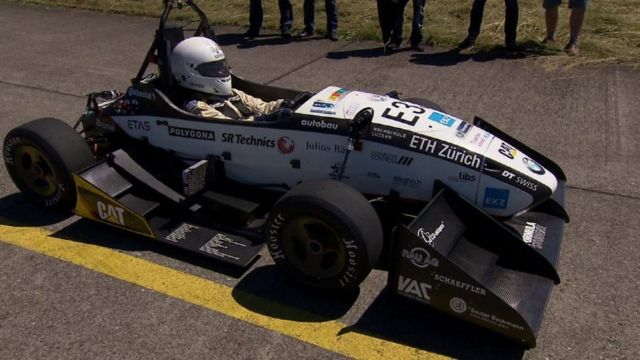 The grimsel car took only 1.513 seconds to reach 100kph (62mph) – slashing about a quarter of a second off the previous record time.

So far, no petrol-powered production car has managed to hit the same speed in a comparable time.

The grimsel needed only 30m (98ft) of track to reach the landmark speed.

The previous record of 0-100kph in 1.779 seconds was set by a team from the University of Stuttgart last year. By comparison, the fastest production vehicle, the Porsche 918 Spyder hybrid, takes 2.2 seconds to reach the same speed.

The car has been built and refined over the last year by 30 students studying at ETH Zurich (ETZ) and Lucerne’s University of Applied Sciences and Arts. Almost all of car’s parts have been custom built apart from its tyres, battery cells and the motor control units.

In a statement, ETZ said the four-wheel drive system used by the grimsel was key to its swift acceleration. A powerful motor is mounted on each wheel and the car has a sophisticated traction control system that adjusts the performance of each one to maximise torque.

The lightning-fast car weighs only 168kg (370lb) thanks to widespread use of carbon fibre in its construction.

The record was set on a race track on the Dubendorf air base near Zurich.

The grimsel, named after an Alpine pass. is not just a demonstration vehicle but has also been used extensively in the Formula Student race competition.