China has said it will raise tariffs on $60bn (£46bn) of US goods from 1 June, extending a bilateral trade war. 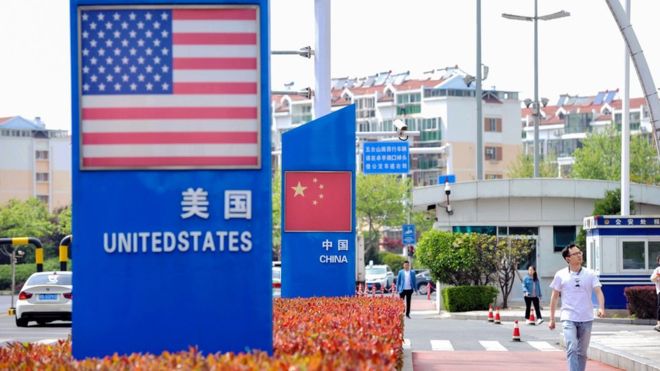 The move comes three days after the US more than doubled tariffs on $200bn of Chinese imports.

US President Donald Trump had warned China not to raise levies but Beijing said it would not swallow any “bitter fruit” that harmed its interests.

Stock markets in both Europe and the US fell.

As well as ordering a tariff increase on $200bn worth of Chinese imports, Mr Trump also directed the US trade department “to begin the process of raising tariffs on essentially all remaining imports from China”, estimated to be valued at around $300bn.

“Maybe something will happen,” he said. “We’re going to be meeting, as you know, at the G20 in Japan and that’ll be, I think, probably a very fruitful meeting.”

Earlier, the president had warned China against a tit-for-tat response to the US’s actions last week.

“China should not retaliate – will only get worse!” Mr Trump tweeted shortly before news of the Chinese decision came.

Mr Trump also said China had “taken so advantage of the US for so many years”.

He added that US consumers could avoid the tariffs by buying the same products from other sources.

“Many tariffed companies will be leaving China for Vietnam and other such countries in Asia. That’s why China wants to make a deal so badly!” he said.

Mr Trump’s approach in the dispute has put him at odds with his own top economic adviser, Larry Kudlow, who has said “both sides will suffer”.