Other highlights of the Easter holidays in the Vatican on Sunday morning are the Easter Mass of the Pope in St. Peter’s Square and around noon the solemn blessing “Urbi et orbi”. 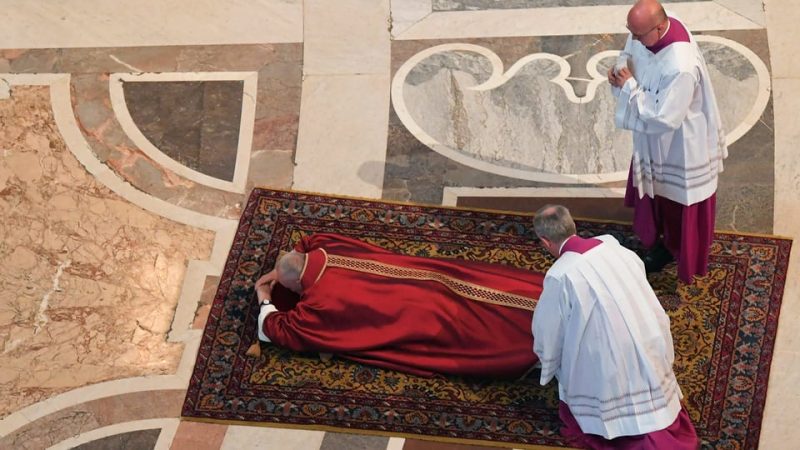 With service in St. Peter’s Basilica Pope Francis thought on Good Friday of Jesus’ suffering and death. After readings from the Holy Scriptures and the Great Intercessions, the worship of the cross was at the center of the celebration.

At the beginning of the cross-adoration, Francis, as required by the Good Friday liturgy, prostrated himself at the foot of the altar. Here he stayed for a few minutes praying. Numerous cardinals and bishops, as well as diplomats accredited to the Holy See, took part in the ceremony. In remembrance of the death of Jesus, the Catholic Church does not celebrate Mass on Good Friday and Holy Saturday.

In the evening, the Pope together with thousands of believers prayed the Way of the Cross. The traditional ceremony commemorating the Passion of Jesus Christ 2000 years ago, a high point in the Easter program, ran off in the light of many torches on the so-called Via Crucis in front of the Coliseum. The Pope took part in the celebration in prayer.

Francis followed the ceremony from a pavilion on the Palatine Hill. Many believers had waited for hours for the beginning of the ceremony in front of the Coliseum. An Italian nun, Eugenia Bonetti, president of the association “Slaves no more”, this year wrote the meditations for the Way of the Cross and drew attention to the topic of human trafficking. In 2019 there will still be people who will be “crucified” for others to enrich themselves. She referred to the forced prostitution of migrants, especially minors. Every single person is called to personally oppose human trafficking.

The ceremony is part of the Easter celebrations in Rome and is considered one of the most beautiful devotions in the Roman church year. The strongest security measures were taken with regard to the Way of the Cross in Rome. Anti-terrorist units and police special forces oversaw the event. Thousands of soldiers were deployed for security in Rome during the Easter holidays.