Bloodshed In Harare As Troops Clash With Opposition Protesters

At least one person was killed in Zimbabwe’s capital, Harare, on Wednesday as soldiers stepped in to disperse stone-throwing opposition supporters who accused the ruling party of trying to rig Monday’s presidential election, witnesses said. 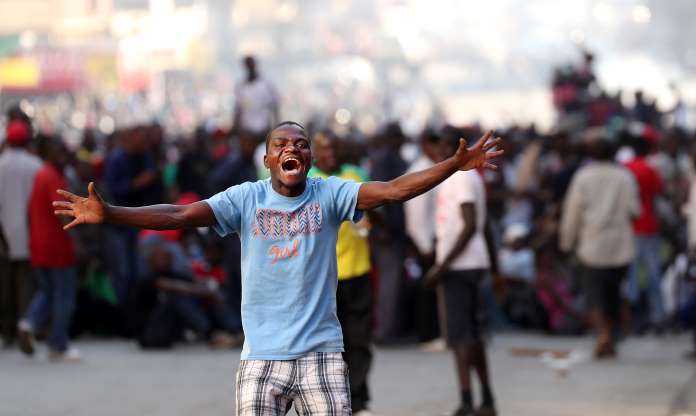 Gunfire crackled in the streets while troops, backed by armored vehicles and a military helicopter and some with their faces masked, cleared the streets.

One person was shot dead near a bus rank, witnesses at the scene told a Reuters photographer.

The deployment of soldiers and their beating of unarmed protesters is a setback to President Emmerson Mnangagwa’s efforts to shed Zimbabwe’s pariah status after decades of repression under Robert Mugabe, who was ousted in a coup in November.

Even before the violence, European Union observers questioned the conduct of the presidential and parliamentary poll, the first since Mugabe’s forced resignation after nearly 40 years in charge of the Southern African nation.

Scores of his supporters who had been burning tires in the streets then attacked riot police near the Zimbabwe Election Commission (ZEC) headquarters. Officers responded with tear gas and water-cannon.

“I was making a peaceful protest. I was beaten by soldiers,” said Norest Kemvo, who had gashes to his face and right hand. “This is our government. This is exactly why we wanted change. They are stealing our election.”

Justice Minister Ziyambi Ziyambi said the army had been called in to ensure “peace and tranquility.”

A police spokeswoman said the troops were deployed at the request of police, who could not cope with the violence. They will remain under police command, the spokeswoman, Charity Charamba said.

“We had no weapons. Why are the army here beating us? shooting us? This is not an election it is a disgrace on our country,” one young man, Colbert Mugwenhi, said.

“We are tired of them stealing our votes. This time we will not allow it, we will fight,” said one protester who wore a red MDC beret in central Harare.

The electoral commission had said it would start announcing results for the presidential race from 10.30 GMT but that was then pushed back at least 24 hours.

The EU did not understand why the release of the presidential result was taking so long, Brok said.

“The longer it lasts that the results of the presidential election is not known, the more lack of credibility it provides,” he said.

Zimbabwe was once one of Africa’s most promising economies but became descended into corruption, mismanagement and diplomatic isolation in the latter stages of Mugabe’s administration.

Its population of 13 million is struggling amid shortages of foreign currency, unemployment above 80 percent and lack of foreign investment.