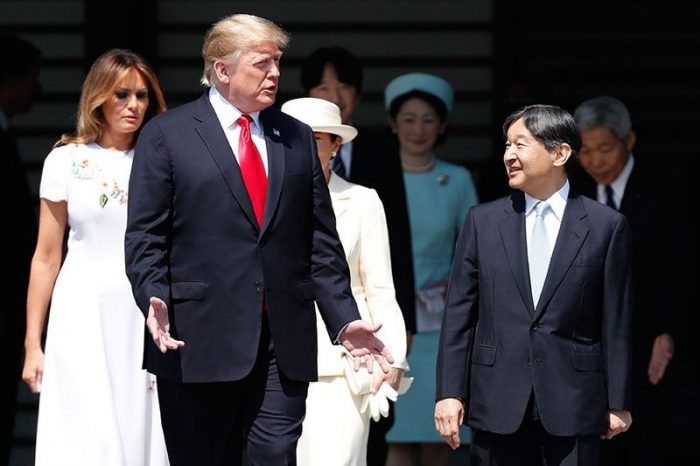 Mr Trump, who is currently on a four-day state visit to Japan, was greeted by the emperor and Empress Masako at the Imperial Palace in Tokyo.

The US leader said ahead of the meeting that it was a “great honour”.

Emperor Naruhito ascended the throne earlier in May after his father Akihito stepped down – the first abdication by a Japanese emperor in centuries.

“It’s over 200 years since something like this has happened,” Mr Trump said of the abdication on Sunday. “So it’s a great honour to be representing the United States.”

Mr Trump and First Lady Melania Trump were greeted by a Japanese honour guard and crowds waving US and Japanese flags as part of a formal welcoming ceremony on Monday.

Over the weekend the US president played golf and watched a sumo tournament with Japanese PM Shinzo Abe.

The pair are regular golf partners, and Mr Trump has noted their “very, very good chemistry”.

The two leaders will meet for talks on Monday, and are expected to discuss trade and relations with North Korea. Ties with the US are of great strategic importance to Japan, and the countries are currently working on a bilateral trade agreement.

However Mr Trump has said that “much” of that deal will wait until Mr Abe faces elections for Japan’s upper house of parliament, which are expected to take place in July.

The pair are also likely to touch on the ongoing China-US trade war, which has hurt US allies including Japan.

Later Mr Trump will meet the families of Japanese citizens who were abducted by North Korea decades ago, to train North Korean spies in Japanese language and customs.

The decades-old issue is a painful chapter in relations between Pyongyang and Tokyo.

North Korea has admitted kidnapping 13 Japanese citizens in the 1970s and 80s, and returned five to Japan in 2002. It maintains the rest are dead – something Japan does not believe.