President Donald Trump has hailed a deal reached with Mexico to help stem the flow of migrants to the US after he threatened to impose trade tariffs. 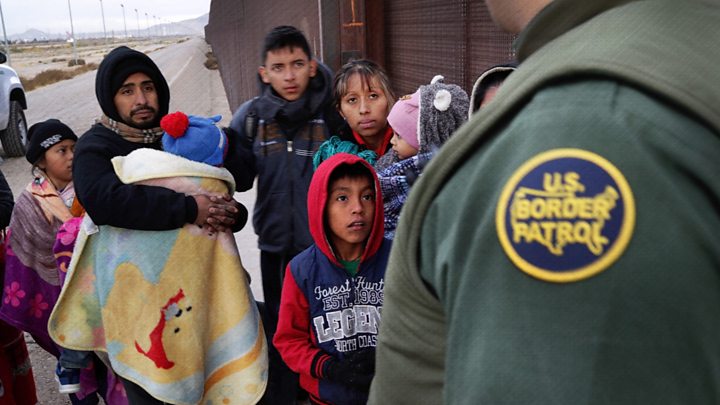 Under the deal, in which Mexico agreed to take “unprecedented steps”, the duties that were due to come into effect on Monday have been suspended.

“Mexico will try very hard, and if they do that, this will be a very successful agreement,” said Mr Trump.

There were fears that the tariffs could hurt US businesses and consumers.

Under Mr Trump’s proposal, duties would have risen by 5% every month on goods including cars, beer, tequila, fruit and vegetables until they hit 25% in October.

The deal was reached at the end of three days of negotiations which saw Washington demand a crackdown on Central American migrants.

What do we know about the deal?

In a joint declaration released by the US state department, the two countries said Mexico would take “unprecedented steps” to curb irregular migration and human trafficking.

But it seems the US did not get one of its reported key demands, which would have required Mexico to take in asylum seekers heading for the US and process their claims on its own soil.

In one of a series of tweets about the deal, Mr Trump quoted National Border Patrol Council president Brandon Judd as saying: “That’s going to be a huge deal because Mexico will be using their strong Immigration Laws – A game changer. People no longer will be released into the U.S.”

What is the reaction in Mexico?

Mexico is currently one of the largest trading partners of the US, just behind China and Canada – two countries also locked in trade disputes with the US.

President Andrés Manuel López Obrador ran for office vowing to stand up to the US and once said he would not allow Mexico to be Mr Trump’s “whipping boy”.

But some Mexican politicians felt he had given too much, too quickly, and they demanded to see details of the deal.

Ángel Ávila Romero, a senior member of the left-wing PRD party, said the agreement was “not a negotiation, it was a surrender”.

“Mexico should not militarise its southern border. We are not the backyard of Donald Trump,” he tweeted.

What’s the situation on the US-Mexico border?

On Wednesday, US Customs and Border Protection said migrant detentions had surged in May to the highest level in more than a decade – 132,887 arrests, a 33% increase from April.

The detentions were the highest monthly total since Mr Trump took office.

In February, Mr Trump declared an emergency on the US-Mexico border, saying it was necessary in order to tackle what he claimed was a crisis.