Three policy turnarounds by President Trump this month have underscored his freewheeling governing style, an approach that some experts warn sends mixed messages and puts U.S. national security at risk. 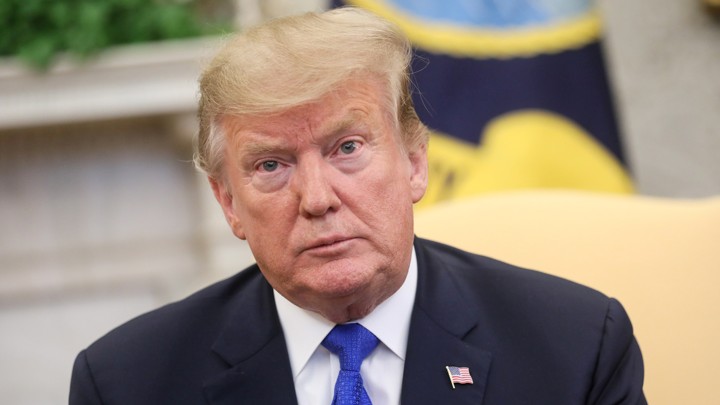 Trump’s approach on three issues — U.S. Immigration and Customs Enforcement raids, Mexican tariffs and Iran — is politically risky for the president, who is increasingly employing brinkmanship in an effort to achieve key policy goals.

He added: “Iran should not mistake restraint for a lack of resolve. All options remain on the table.”

But the president’s critics are trying to turn his often erratic approach into an issue for voters.

With the first Democratic debates of the 2020 presidential race days away, several White House contenders seized on Trump’s calling off of the Iran strike as the latest in a pattern of reversals.

On CBS’s “Face the Nation,” Sen. Bernie Sanders (I-Vt.) described Trump’s actions as similar to “somebody setting afire a basket full of paper and then putting it out.”

Sen. Kamala D. Harris (D-Calif.) struck a similar note, telling CBS’s Ed O’Keefe, “I don’t believe that anyone should receive credit for a crisis of their own making.”

With Trump, in contrast, “both our allies and our enemies are at a loss to understand what the president means,” he said.

The results of Trump’s strategy on policy have been mixed at best — and few issues offer as complete a picture of the president’s habitual brinkmanship as his effort to overhaul U.S. trade policy.

Last month, he abruptly threatened to impose tariffs on all Mexican goods entering the country to force Mexico to tighten its southern border against migrants fleeing Central America. He gave Mexican authorities 10 days to show progress or face a 5 percent tariff on the roughly $346 billion in goods Mexico ships each year to the United States.

Trump also came to the precipice of withdrawing the United States from the North American Free Trade Agreement on his 100th day in office, but pulled back after pleas from Mexican and Canadian leaders. He held the threat of quitting the deal over subsequent negotiations aimed at the new UCMCA, which awaits congressional action.

Days before that deadline, Trump again delayed, citing “substantial progress” in the talks. He set no new deadline, but in early May after talks collapsed, he implemented the tariff hike.

He also began the process of imposing tariffs on an additional $300 billion in Chinese imports, potentially creating a fresh obstacle to reaching a trade deal with Beijing. Chinese officials have insisted that all tariffs be removed as part of any deal that addresses the president’s complaints about China’s trade practices.

“President Trump gives millions facing deportation two weeks before his next tweet attack,” Durbin, the No. 2 Senate Democrat, said in a Sunday tweet. “Their fate depends on whether Congress will allow him to indefinitely jail children. This is America?”