There’s no denying the popularity of sport-utility vehicles in America, but with so many on the road, it can be hard to stand out from the crowd. If getting noticed in your SUV is a goal, then the Rhino GX could be your SUV of choice. Hand built by US Specialty Vehicles, the Rhino GX is rare, massive, expensive and boasts styling like nothing else on the road. 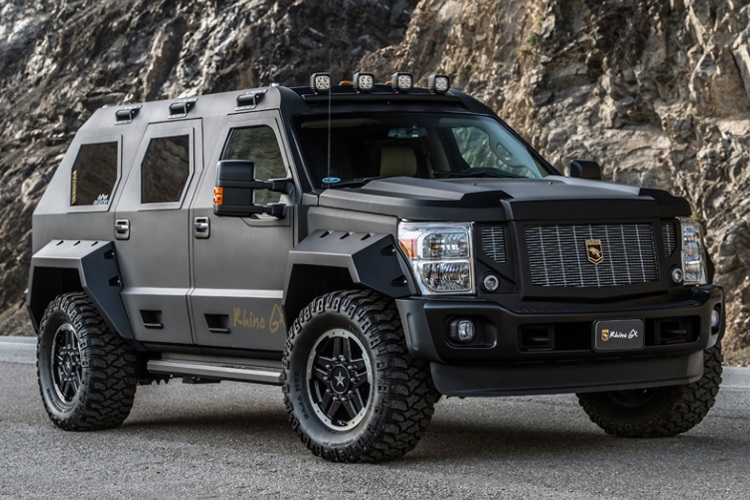 Spotting a Rhino GX on the road would be rather difficult, since the vehicle we tested on the winding roads around Pebble Beach is one of only 25 in the U.S. There are about 300 Rhino GXs worldwide, and most of those are in Asia.

One look and it’s clear that the Rhino GX offers impressive capability. US Specialty Vehicles hand builds the bodies of the GX, which includes a fully-integrated roll cage. However, the big SUV rides on a proven chassis from the Ford F-450 Super Duty. The dashboard, mirrors, door handles and headlights also come from Ford—everything else is unique to the Rhino GX.

The exterior styling gives the impression that the Rhino GX is an armored transport, although the vehicle we tested simply had that appearance. US Specialty Vehicles uses a textured paint very much like the material used for bedliners—it has a rugged look, is very durable and is easy to clean. The Rhino can be armored if a customer requests it—but the armoring is done for USSV by a third party.

Adding to the tough look are the 20-inch custom wheels fitted with 38-inch Toyo Open Country off-road tires. LED lights and grab handles add to the impression that this is more like an armored transport than SUV.

As tough as the Rhino looks on the outside, it’s quite luxurious on the inside. The vehicle we tested has two rear rows with total seating for seven. The second row has limousinelike legroom with large, power-adjustable leather-trimmed bucket seats.

For those in the market for a fully capable and luxurious SUV that you likely won’t see in your neighbor’s driveway, the Rhino GX makes an excellent option. A new generation of Rhino GX will be coming next year, built on the recently updated Super Duty platform with updated technology, a more luxurious interior and an updated design.