Outside China, few drivers have heard of brands such as Hit BYD or Beijing Automobile Works. But they’re two of the largest players in the world’s biggest market for electric cars. 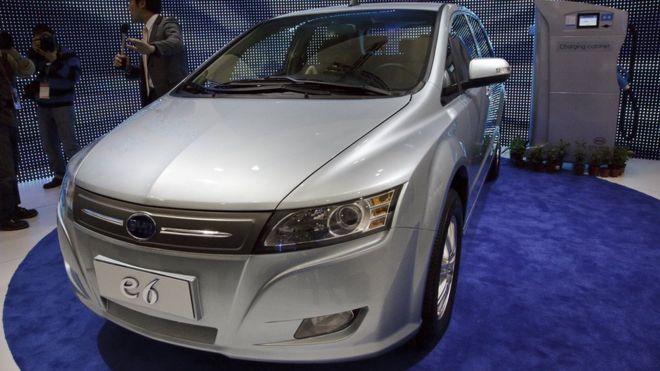 For a decade, the Chinese government has coaxed buyers and manufacturers into the electric vehicle market through subsidies and other incentives.

The numbers suggest the strategy worked: the International Energy Agency says China buys more than half of the world’s new electric cars.

Now, the government is set to push the burden onto manufacturers, through a new “cap and trade” system and rules that make it harder to set up a factory to make combustion-engine cars.

The rules were believed to have come into force on 1 January this year.
Small but growing rapidly

The most recent figures show that New Energy Vehicles (NEVs) – a category which includes electric and hybrid models – has defied that trend, growing substantially over the past year.

However, the China Association of Automobile Manufacturers (CAAM) says 601,000 NEVs were sold in the first three quarters of 2018, which means they still account only for a small fraction of the market.
How do the new rules work?

The National Reform and Development Commission has said it won’t allow the establishment of new companies that only make combustion-engine cars.

It has also imposed additional conditions for existing companies that plan to set up a factory for cars that aren’t NEVs.

New quotas on electric vehicles are also expected to have an impact on manufacturers.

Under a new “cap and trade” system, any company that makes 30,000 cars or more needs to earn enough credits to match 10% of its output.

So a car company manufacturing the minimum would need to earn 3,000 credits.

But not all cars are treated equally. A NEV can receive between two and six credits depending on how far it can travel before being recharged.

So if a carmaker makes 30,000 cars, it could hit its quota by manufacturing 1,000 cars with three credits each.

There are a number of issues that could, at least in the short term, create some difficulties.

There have already been reports that China’s electric carmakers have taken an initial hit on the stock market over fears about the removal of subsidies.

Tu Le says a lack of electrification infrastructure could also weigh on sales and the trade war could be a wild card.

“If the trade war is not resolved within the first quarter of 2019, then this could have significant negative effects on the overall sales of cars and customers’ willingness to take a chance on new technologies,” he said.

How will it affect the market for electric cars?

Vivek Vaidya expects the new plan to succeed, mostly because manufacturers will have a strong incentive to make more electric and hybrid cars.

He also thinks some Chinese market leaders could expand their reach beyond the mainland. But unless you live in a developing market, it’s not very likely a Chinese electric vehicle will be driving down your street any time soon.